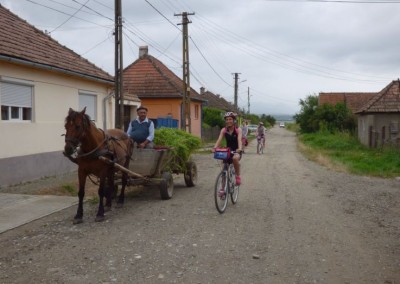 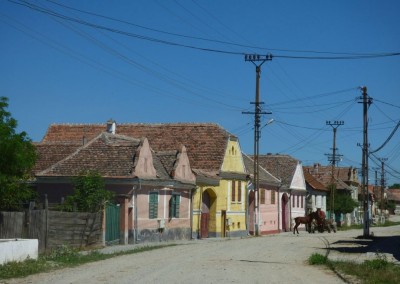 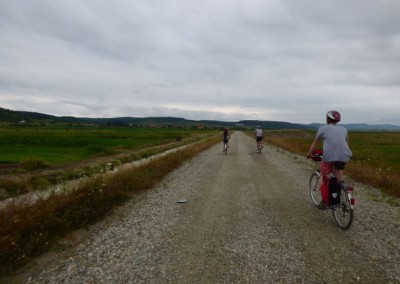 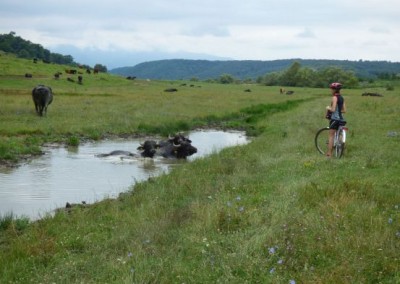 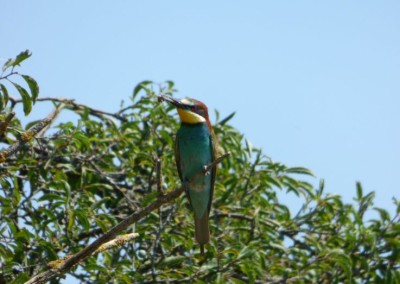 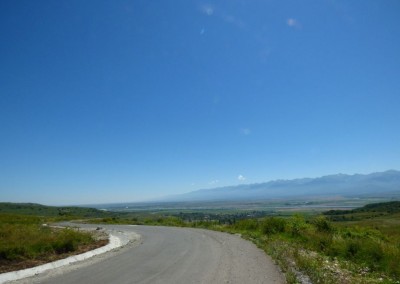 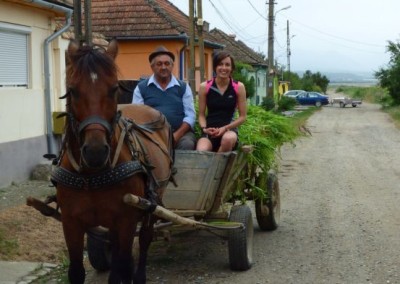 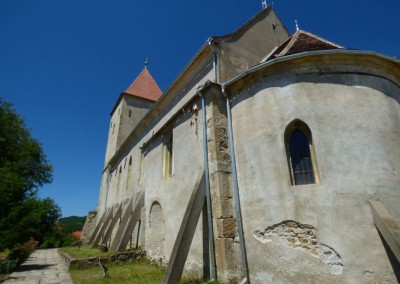 Want to see a diversity of landscapes, traditions and cultures in just one day? You should then try this cycling trip that starts in Avrig.

Avrig is the suggested starting point but being a circle tour we can start it anywhere else along the route.
This cycling trip takes us through scenic country roads at the foothills of the Fagaras Mountains along the Olt river. After crossing the river on a dam, we leave the Olt valley behind to cross a hill and reach the wonderful Hartibaciu valley, the second-largest Natura 2000 area in Romania, home of the largest breeding population of the Lesser Spotted Eagle in the country.

We’re going to cycle through an area where the 3 main cultures in Transylvania meet: Hungarian-Szeklers, Transylvanian Saxons and Romanians.

Our start will be from the Brukenthal Summer Palace in Avrig.
Along our way, we’re going to cycle through some villages founded in medieval times. They proudly display their Lutheran fortified churches (Bradu, Sacadate, Avrig-town). In some other places, we’re going to see old Orthodox Churches, a religion that although nowadays represents the majority, had it’s struggle during the medieval times and even later during the Habsburg domination. We’re going to see the former Greek Catholic Church in Racovita, a symbol of sacrifice for the Romanians in Transylvania who had to give up on Orthodoxism as a sole solution for keeping the national identity.

We’re going to see the traces left by the communist regime in the almost-ghost-Town of Marsa, a socialist settlement developed around the heavy-industry factory that used to produce the 120 tons trucks with wheels twice as big as a person.

The tour is around 50 km long, 800m elevation gain ( 2 bigger climbs-one on asphalt, one on gravel forest road). About 3/4 of the route goes on asphalt (with little car traffic) and the rest on gravel/earth roads. It is suitable for both mountain bikes and trekking bikes and it has a medium difficulty level.  The climb through the forest might have muddy segments if it rained recently. The basic tour can take between 4.5 and 7 hours depending on our stops.

Option A: +20km loop along the narrow-gauge railway on Hartibaciu valley
This added segment goes almost exclusively on gravel and earth roads through flowering meadows full of colourful butterflies, dragonflies and a whole lot of other insects while accompanied by various bird calls. Often sights of bird species include the Lesser Spotted Eagle, at least 4 species of Woodpeckers, Bee-Eaters, Red-backed Shrikes, Hoopoes, Golden Orioles and a great number of passerines. Hares, foxes and Roe Deers might also be seen while drinking water from the river. The trail goes along the narrow-gauge railway (the Mocanita, as the people call it), which is no longer in use since 2001 and where nature already claimed its space.
Option B: the starting point can also be Sibiu (90km tour)
The tour can also start in Sibiu where we have several options: either shorter and faster on asphalted roads or longer and slower on gravel roads through hills and valleys, meadows and forests.

The tour must be booked a few days in advance. Transfer from Sibiu to Avrig can be arranged.

The old town of Sibiu which alongside Luxembourg was the European Cultural Capital in 2007, is one of the 7 fortified citadels(“Siebenburgen”) built by the German Saxons – a medieval city dating since 1191. It’s 4 belts of fortifications can still be seen today and within them, narrow streets surrounded by Gothic houses lead towards the “Upper Town” to the baroque buildings bordering the famous squares where most of the landmarks and monuments are.
Combine with this tour
In the short time we had in Romania this was the best thing we could have done with our time.
An excellent way to see wildlife, plants and local ways of life.
Mihai was very knowledgeable about the different eras of buildings and the history of the villages we visited.

This tour showcased the beauty of a country often over looked by tourists. Charlotte Cosey