Being a Nature Guide – A short interview in the local press. 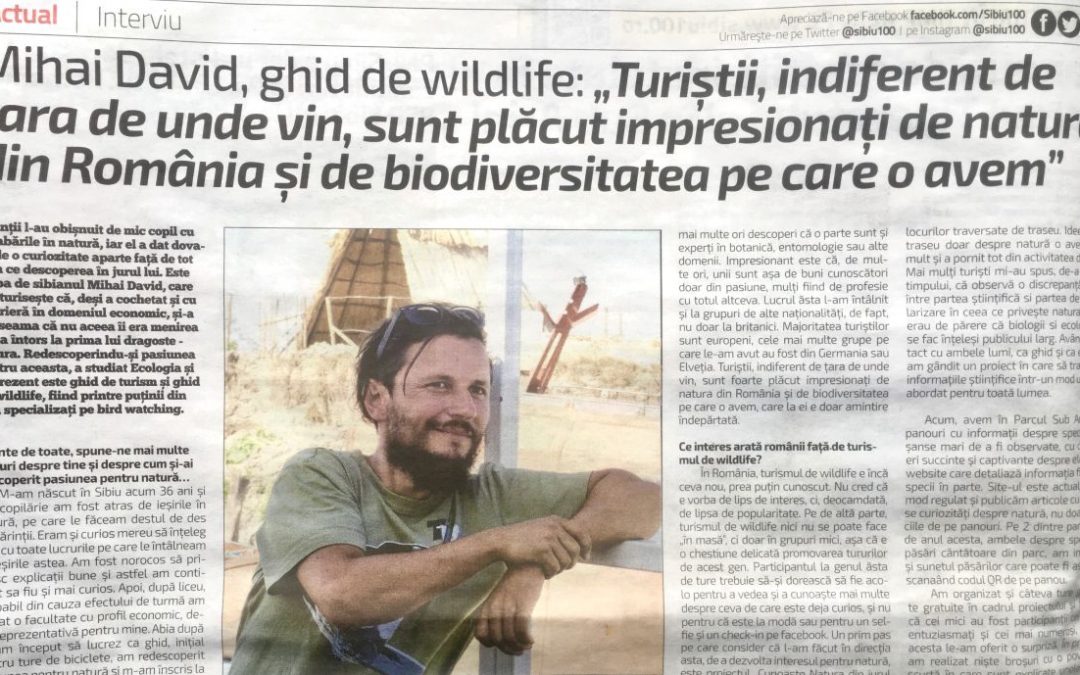 Being a Nature Guide an interview published in October 2020 in Sibiu 100% local newspaper.

As a child, his parents often went with him on nature walks and he showed a special curiosity for everything he discovered around. This article is about Mihai David from Sibiu. He confesses that, although he flirted with a career in the economic field, he realized that this was not his purpose and returned to his first love – nature.

Rediscovering his passion for it, he studied Ecology and is currently a travel guide and wildlife guide (nature guide), being among the few in the country specializing in bird watching.

First of all, tell us more about yourself and how you discovered your passion for nature…

I was born in Sibiu 36 years ago. As a child, I was attracted to nature trips, which I did quite often with my parents. Quickly I became curious to understand what was going on with all the things I encountered in these outdoor walks or hikes. I was lucky to receive good explanations and so I continued to be even more curious.

Then, after high school, probably because of the herd effect, I attended an economic profile university study. But that wasn’t at all representative for me. Only after I started working as a guide, initially for cycling tours, I rediscovered my passion for nature.  So I enrolled at the Faculty of Sciences in Sibiu, specializing in Ecology.

You are currently a travel guide and wildlife guide (nature guide), specializing in bird watching. What exactly does your job involve?

Nature guide activity is the most dynamic and interactive, at least that’s how I see it. The city walls and church towers are always in the same place, not much changes on a cultural tour. But, if you have to do the same route through nature several times, you get to see different species from one tour to another..Or you don’t see them at all and you’ll have to improvise. By improvisation, I mean interpreting the traces left by animals in the absence of direct observations.

As a nature guide, you need to know the places with the highest chance of observing certain species. Obviously, you also need to know the species, to be able to identify it in nature and to know as many details as possible about its ecology. That makes it easier for you to observe it and also to offer the tourist, besides the chance to see it, some interesting information about it.

The most important thing is to have respect for nature, not to try and find the species at any cost. Not to get too close, not to disturb, not to destroy and to leave as little traces as possible.

I started working initially as a guide for cycling tours organized by an agency specialized in wildlife tours, with which I still collaborate today, in the Danube Delta. Yes, we do a one-week bike tour there, it’s possible… But we also use boats. And we survive the mosquitoes… I know these are the first questions that come to most people’s minds when hearing about this tour. In the first year, I only did cycling tours. But I was all eyes and ears to the stories of my colleagues, experienced wildlife guides, whenever I had the opportunity. After that, I went on a few tours they were guiding to learn more. And the Delta really gives you the opportunity to practice from morning to evening.

Starting with the third year, I began doing wildlife guided tours myself. At the same time, my childhood curiosity was reactivated. Therefore, I enrolled in the Faculty of Sciences, which I also graduated in the meantime. Most of the tours are still in the Delta and in Dobrogea. Some of them have 2-3 days in Transylvania, to complete the list of observations with species that don’t appear in the southeast of the country.

You organize tours, especially for foreign tourists. Tell us what parts of the world they come from and what they like most about us in the country?

The biggest birdwatching enthusiasts are the British. In their groups, you often find that some of them are also experts in botany, entomology or other fields. Impressive is that, many times, some are so good connoisseurs only out of passion, many having a completely different professional background. I also found this in groups of other nationalities, in fact, not only in the British.

Most of the tourists are Europeans. Most of the groups I had were from Germany or Switzerland. Tourists, regardless of the country where they come from, are very pleasantly impressed by the nature in Romania and the biodiversity we have. Unfortunately this is just a distant memory in many parts of the western countries.

What interest do Romanians show towards wildlife tourism?

In Romania, wildlife tourism is still something new, too little known. I don’t think it’s about lack of interest, but, for now, it’s about the lack of popularity. On the other hand, wildlife tourism can not be done “en masse”, but only in small groups. Therefore it’s a delicate matter on how to promote such tours.

The participant in this type of tour must want to be there to see and know more about something he is already curious about. And not because it’s fashionable or for a selfie and a check-in on Facebook. A first step that I consider that I have taken in this direction, to develop the interest in nature, is the project „Cunoaște natura din jurul tău” ((Know the nature within your surroundings), which I have been working on for 2 years.

Regarding the „Cunoaște natura din jurul tău” project, where did the idea start, what have you managed to do so far and what other plans do you have for the future?

Already from the first years of activity, we, at “Tura in Natura” NGO, in addition to marking the cycle routes, we mounted information panels. Besides the map and details about the route, the panels also included some information about the nature or history of places crossed by the route.

I had the idea of ​​a route only about nature for a long time and it also started with the nature guide activity. Several tourists have told me, over time, that they notice a large discrepancy between the scientific part and the popular part in terms of nature understanding. Many were of the opinion that biologists and ecologists do not make themselves understood by the general public. Having contact with both worlds, as a guide and as an ecologist, I thought of a project in which to transpose scientific information in a way that is easy for everyone to approach.

Now, we have in Sub Arini Park 10 panels with information about the species with great chances to be observed. Each species has a brief and captivating description and on the project’s website, the information is then detailed. The site is updated regularly and we publish articles with various curiosities about nature, not just the species on the panels. On 2 of this year’s panels, both about the species of songbirds in the park, we integrated the sound of birds. The sounds can be heard by scanning the QR code on the panel.

We also organized some free guided tours within the project. Because the little ones were the most enthusiastic and numerous participants, this year we offered them a surprise. In the project, I made some brochures with a short story in which some aspects of nature are explained. And on some pages, the children can colour the main character of the story. We distributed the brochures to the participants of the inauguration event. They can also be found at the tourist information centre at Sibiu City Hall or at us, at Tura in Natura. As future plans, I would like to develop the idea started with the brochure and turn it into a storybook for children. And it wouldn’t hurt to have an audio guide for the route in the park.

You hold the position of vice-president within the “Tura in Natura” Association. What is your role in the association and what kind of events are organized?

My role in “Tura in Natura” is about the same as the other colleagues, that is, as a volunteer. I hold the position of vice-president because at the time of the establishment we were only 3 friends with a good idea and in the constitutive act 3 positions had to be occupied. Our events are mainly related to the promotion of the use of bicycles as an alternative means of transportation. And that is for everyone, we are not just addressing a certain category. And because the bike is friendly with nature, we started to include informative activities about nature and environmental protection.